Select from the menu items ("Portfolio" etc.) to go to one of the sections of the website.

Inside the website, click on the small image to go to a section of the portfolio or a larger image.

Always fascinated by animals, I began to draw them seriously from life when I was at Scripps College (BA ’56) going to the San Diego Zoo and the County Fair, and drawing our goats, horses, cats and dogs at home in Ojai. Lucky in my teachers, I had been carving stone and wood, and making clay animals with Albert Stewart and Betty Davenport Ford. At the Claremont Graduate School (MFA ’64) taking ceramics from Paul Soldner, I began Raku firing. Later I worked in other media: soft sculpture, bronze, and cast paper, as well as clay. I showed work in California, the Philippines, the Midwest, and on the East Coast, wherever I was living or had connections.

In drawing, I look at an animal and study the forms, gestures, markings, and personalities. When the animal moves, I go on to another drawing. Zoo drawings led me to the theme of animal extinction. Over the past twenty years I completed a series of large clay antelope. After a low temperature firing with a little glaze, they were sawdust fired. I liked the accidental quality of the smoke colors, similar to Raku, which I continue to enjoy. I wanted to keep the natural grace of living animals, seeing the pieces as stories of individuals, with a feeling of fragility. These are fragments which echo the limited place wild animals have left in our world today.

The Oryx series began with some barely suggestive sketches I made of a pacing Scimitar Horned Oryx at the National Zoo in Washington DC. I can’t find the drawings, but I remember him vividly, mostly white, but with a chestnut neck and face and leg markings, and a long curve of horns. I also used some Arabian Oryx for this series. They are the straight horned ones, dark brown and white. Other subjects include the Blaauwbock, or Blue Antelope, extinct since 1800, a subject I used in an earlier show in Iowa.

Working, I use slab methods, impressing textures, draping or folding clay slabs over bunched cloth to stiffen for shapes and curves. I cut, model, and join, press out, and impress and scratch textures. I try various oxides, slips, and glazes. I like to use unpredictable firing techniques: raku, sawdust smoking, and wood and salt firing. Random surprises are interesting to me. 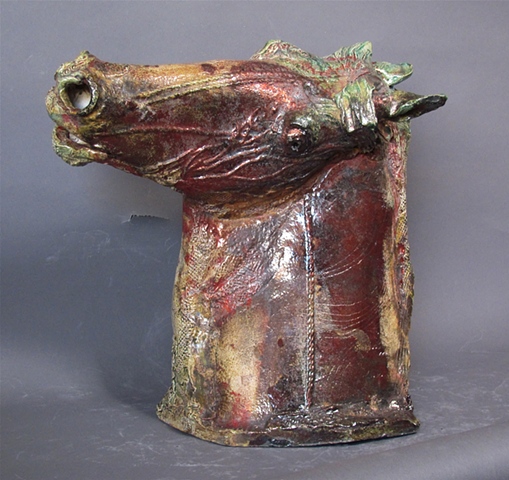